NetDragon Websoft and Elernity recently announced that the VR educational product VR Mysticraft has achieved great success in several VR competitions in Hong Kong. In Samsung's Solve for Tomorrow Competition, students from Hong Kong St. Paul's Convent School used VR Mysticraft to create VR works and won the third prize. Coincidentally, VR Mysticraft is listed as one of the specified tools of the Green Flame VR Fun Fair competition in HongKong, together with Minecraft, Unity, and CoSpaces, in fall last year, the environmentally-themed VR works created by VR Mysticraft also impressed the audience and clinched several prizes. Currently, VR Mysticraft has been promoted and used in schools in Singapore and Hong Kong with over 100,000 global users. More and more overseas students are using and enjoying VR Mysticraft, which shows the staged achievement of overseas promotion.

In Samsung Solve for Tomorrow Academic Science and Technology Competition, students from Hong Kong St. Paul's Convent School clinched the Secondary Group third prize by creating VR works with VR Mysticraft. A consultation workshop was set up by the competition for the first time where students could listen to the opinions of professionals from technology and education on their products or design concepts, and then further improve their works. The innovative display of the VR content created by VR Mysticraft has not only stimulated the interest and imagination of the students but also got unanimously affirmed by the judges.

Another competition VR Mysticraft participated is the Green Flame Fun Fair Inter-school VR Game Design Competition held by Towngas and HKEdCity. The competition gives primary and secondary students the opportunity to showcase their creativity in the design of environmentally-themed VR games, while also raising awareness of environmental protection. There’re totally 43 schools and 83 teams participated in the contest. 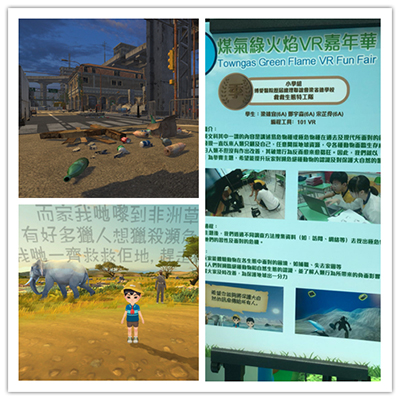 VR Mysticraft is a gamified educational software which helps students improve their learning outcomes and allows for efficient production of high-quality 2D, 3D, and VR content. It not only helps students with constructive learning, but it also makes the teachers’ job much easier. VR Mysticraft also allows VR content editors to quickly and easily do their work. The client can be downloaded on the official website.