In today's era, modern technology has replaced traditional PowerPoint presentations with animation. There are several eLearning and certification platform that offers lessons where a teacher teaches by using live animation and not passive slides. The concept of interactive and immersive learning is prevailing and the old horizontal way of learning is fading.

Schools and universities are replacing their old and unpopular methodologies of departing knowledge. Now, Virtual and Augmented Reality in Education has taken the space in student Learning and Development and it will entirely transform the way educators teach and students learn. The role of AR/VR in the education system is increasing with every passing month.

The education industry has undergone a lot of changes over the past few years. Though, the trend hasn't adjusted for a long time. Even today, the stapling mechanism used in the teaching industry is PowerPoint.

By adopting modern technologies such as AR and VR, learners will learn immersively like never before. These innovations are not restricted to any particular age group of learners. Today, it may not be available in every institution or college, but in the forthcoming years, it sure will be there.

According to a report by the New Jersey Institute of Technology, the AR app development business is going to touch $660 million soon. 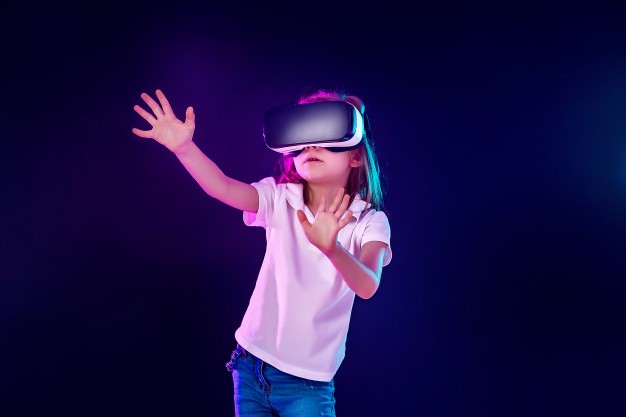 The Conventional form of teaching and what is the role of AR/VR in the education system?

Before we move on to talk about the ways AR and VR technologies are helping kids enhance their learning process, we must first understand the conventional method. And also what all needs to be changed for a better and immersive learning experience.

Historically, most technologies that have been created since the past few decades have primarily focused on boosting learning. They have been directed at facilitating a safe and accessible passage to gather data, information, and observations regarding the world.

Years before the computers were born, the sole authoritative tool that helped us to retain facts: books. However, it was/is not a very easy and sorted task to locate solutions as we do on the internet. Say, for instance, try to find which year Mughal ruler Babur came to India using both your book and the internet. You’ll easily realize how technologies have made it easy for us and other students to collect and retain new information.

We are currently living in a digital age. Here modern technologies have converted books into eBooks. Advanced search engines make data-finding creamlike — with barely a few clicks you can find answers to any and every problem. In short, the sky is the limit.

Even though we are reached great highs in terms of knowledge attainment and education has become more efficiently available for more people, the contemporary approach to training has two important problems:

It still bargains on the same traditional format - fact retention. Educational methods primarily focus on giving facts; but, having access to and receiving a lot of data isn’t learning. Being informed isn’t the equivalent of being educated.

When students receive too much information in a very short period of time, they can get overwhelmed. As a result, they get tired, disengaged, and often are unsure as to why they are studying a topic in the first place.

The role of AR/VR in the education system is to eliminate the boredom and install more immersive among the learns. This will increase their attention span as well as their retention rate.

One of the most significant queries faced by millennials is which technology is more beneficial: AR or VR?

Or, which among them has better potential to mold our future - AR or VR?

The solution to such a problem is that both of them have their own perks and benefits. Augmented Reality utilizes the circumstances around you and overlaps the animation or any form of data on it. Technically, it supplements more to reality.

One of the most prominent advantages of Augmented Reality application development is that it doesn't require any dedicated tool for display. Due to these perks, technology has become the mainstream attention of the fourth industrial revolution. 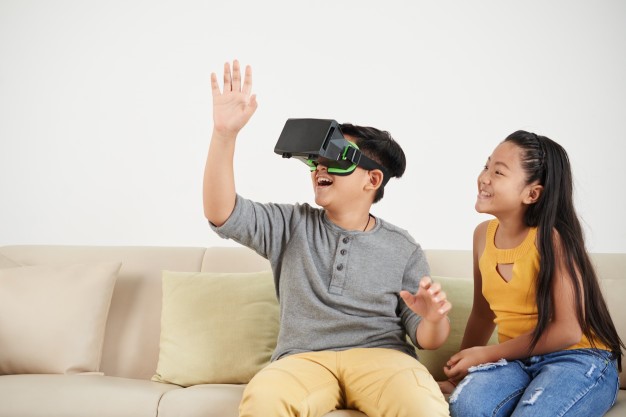 Role of AR/VR in the education system - Argumentative Reality

You must have heard the popular saying - 'A picture is worth a thousand words.' The role of Augmented Reality is to help you accomplish this. Instead of utilizing your time reading a book for cover to cover, it will be more efficient when you visualize the subject.

Another major benefit of argumentative reality is that it does not need any investment concerning hardware. We can easily feel Augmented Reality with the help of our smartphones or tablets.

Say, for instance, Augmented Reality software allows us to put the smartphone camera in front of the science book and see a 2D image of the heart turning into a 3D animation.

On the flip side, Virtual Reality subsists in a completely artificial setting. So, if you want to develop a VR app, you first will have to build the environment and then create animation encompassing it.

Unlike its name, Virtual Reality resembles much more authentic and real when compared to Augmented Reality. However, the disadvantage of VR is that it requires a committed VR headset to run any application.

Has the Role of AR/VR in the education system revolutionized Education Industry?

Virtual Reality Software and Argumentative reality has completely transformed the world of education. VR supplies education right from the first grade to college and beyond. With the help of VR headsets, students are enjoying the immersive content of any subject.

Furthermore, a 360-degree view of all content provides a more genuine feel to the learners as they find themselves as a part of the virtual setting. Also, interaction with VR content supports them in exploring the subject with deep-felt detail. When learners are too engrossed in the virtual world, they cannot be bewildered by the real world. It also boosts their concentration power.

All we want to say that the time has come that we say goodbye to the conventional way of education methods and learning. Augmented Reality app development and software is one of the freshest trends that is supported by the education industry. VR and AR in student learning and growth can be advantageous for sure, though the expense can be a little higher sometimes. AR is mainly developed to lead learners at various steps, whereas VR is used to present a totally different exposure to the students as well as professors.

With the help of immersive technology, teachers get the opportunity to grasp the attention of learners and motivate them thoroughly. With respect to students, they get new tools to envision their subjects and complicated ideas, as well as gain practical skills. We believe that Augmented Reality can deliver that transition faster in the educational field than anyone could imagine.